The overall downward rate trend that has characterized the ocean transportation market for some time is continuing in 2016. The Shanghai Containerized Freight Index, which tracks spot rates for container shipments from major ports in China, is down year-on-year, even accounting for both the general rate increases (GRIs) imposed by carriers in January, May, June, and July of this year and the announced peak-season surcharges. Moreover, volume growth continues to fall behind capacity. The industry added just 1.7 percent to its total 20-foot equivalent units (TEUs) in the three biggest U.S. ports (Los Angeles, Long Beach, and New York/New Jersey) in May 2016 against what the research firm Alphaliner projects to be an 8.5 percent net growth in carrier capacity this year.

Another trend the industry has grappled with is the idling of vessels to constrain capacity. The maritime research firm Drewry Shipping Consultants reported a significant increase in idle capacity in July 2016. The timing seems to coincide with peak season, and some shippers, particularly in South China, are feeling localized capacity pinches. Idle ships are expensive, and it remains to be seen whether the carriers have developed enough discipline to manage capacity if rates begin to rise. 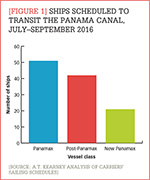 While some ocean transportation trends have stayed the course, there are many new dynamics in the marketplace. These include the expansion of the Panama Canal and a wave of mergers that has upended vessel-sharing agreements (VSAs), the fallout of which is not yet fully understood. The cost structures underlying all of these factors, which will determine the profitability and price-competitiveness of the industry, also face uncertainty.

Ship deployments, alliances realign
After a year-and-a-half delay, the Panama Canal expansion has opened the waterway to some previously excluded post-Panamax ships as well as to "New Panamax" (also called "neo-Panamax") ships, substantially increasing the size of vessels moving from Asia to the U.S. East Coast. (See Figure 1.) This allows ocean carriers to triple the capacity of their ships in service, from 5,000 TEUs to over 13,000 TEUs. The expansion has not been completed without issues, such as the COSCO Xin Fei Zhou's gashed hull (caused by scraping the wall while transiting the Agua Clara locks), or criticism, such as The New York Times' June 22 exposÃ© titled "The New Panama Canal: A Risky Bet." Nevertheless, carriers have implemented many new vessel deployments that take advantage of the canal's increased capacity.

This summer, carriers belonging to the 2M, CKYHE, and G6 vessel-sharing agreements have upgraded at least six service strings containing Panamax vessels with post-Panamax or New Panamax ships. This has added substantial capacity to the market, but it has also brought newer, more efficient ships to relatively long length-of-haul service rotations. This should help carriers improve profitability on those strings—provided rates hold with all this new capacity.

It's not just vessels that are being realigned in today's market; the carriers are shuffling, too. With the mergers of CMA CGM and APL, UASC and Hapag-Lloyd, and China Shipping and COSCO serving as a catalyst, carriers have viewed VSA membership as a strategic counterbalance to the economies of scale that past growth and consolidation has provided to industry leaders. Others are joining VSAs to remain viable in a time when bigger is seen as economically better.

By April 2017, the alliance landscape will have changed considerably. As shown in Figure 2, in the current network there are 16 carriers spread across four alliances. Next year, they will be reformulated as 13 carriers grouped in three alliances.

Currently, the 2M is almost 50 percent larger (in terms of capacity) than the next-largest grouping of carriers. Through the consolidation of carriers and a reduction in the number of alliances, the gap in total capacity between the 2M and Ocean alliances will be down to 17 percent, and the smallest alliance will have roughly the same capacity as the former second-largest alliance.

This rationalization of alliances should enable the smaller carriers to continue to compete with the larger carriers on service offerings and economies of scale. And it could pave the way for further consolidation in the industry. For instance, if efficiency is the strategy, will it be sustainable for six independent carriers (and their corresponding overhead) to compete for customers to feed into the THE Alliance network, the smallest VSA in the industry?

The underlying cost structure of ocean transportation is also a potential source of uncertainty. Bunker fuel prices were down by more than US$100 per metric ton in July compared to the same time last year, and charter rates for New Panamax containerships declined by more than 30 percent, according to the U.K.-based shipping conglomerate Clarksons. In fact, containerships of most classes are trading at or very near historical lows.

Some carriers are taking advantage of today's low vessel-chartering costs. For example, South Korea's Hyundai Merchant Marine restructured its charter rates in an effort to gain access to state support for the purchase of mega-ships, which could set Hyundai up for long-term profitability and provide the 2M vessel-sharing agreement with additional capacity. It's unclear, however, how long this era of low underlying costs will last.