We use cookies to provide you with a better experience. By continuing to browse the site you are agreeing to our use of cookies in accordance with our Cookie Policy.
Home » Will U.S. manufacturing be back on top?
Forward Thinking

Will U.S. manufacturing be back on top?

China's position as the top country for manufacturing may be in jeopardy if a recent report by the global consulting group Deloitte and the Council on Competitiveness is to be believed. While China currently ranks as number one in the "2016 Global Manufacturing Competitiveness Index" (GMCI), the index, which is based on survey results from more than 500 manufacturing executives, predicts that the United States will seize the top spot in 2020. (See Figure 1.) 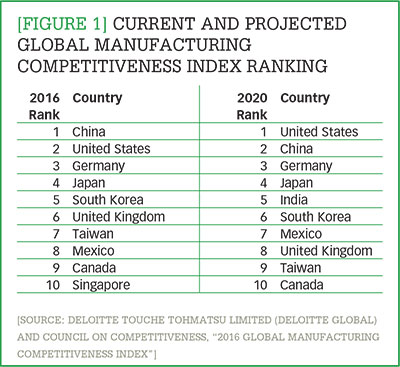 What's driving that movement? In part, it's the increasing importance in manufacturing of advanced technologies, such as predictive analytics, the Internet of Things, "smart" factories, and advanced materials, says the report. As a result, manufacturing organizations are becoming less focused on low-cost labor (although cost competitiveness remains important). Instead, success depends on having an environment that fosters innovation, supplies a ready source of talent, and provides "ecosystem partnerships" such as manufacturing and technology clusters, where a group of similar and related businesses and organizations are located in a defined geographic area.

As a result of this shift, Deloitte sees traditional manufacturing powerhouses, such as the United States, Germany, Japan, and the United Kingdom, becoming once again the best locations for manufacturing. Meanwhile some past "rising stars," such as Brazil and Russia, have seen their position slip.

"Economic and political uncertainty in Russia and Brazil have been major drivers in their decreased rankings in recent years," said Deborah L. Wince-Smith, president and chief executive officer (CEO) of the Council on Competitiveness in an e-mail. "These two countries are prime examples of how a country's socio-political environment and/or public policy can negatively impact manufacturing."

The "2016 Global Manufacturing Competitiveness Index" is the third in a series of reports issued by Deloitte Touche Tohmatsu Limited (Deloitte Global) and the Council on Competitiveness, an organization focused on improving the United States' position in the global economy. The reports are part of a multiyear research effort to help industry executives and policy makers identify the keys to manufacturing success.

According to Michelle Drew Rodriguez, manufacturing leader at Deloitte's Center for Industry Insights, companies can use the index to gain a comprehensive picture of the global manufacturing industry and make key decisions on where to locate and how to win.

The report also provides a view into global executive and industry sentiment about any given nation, as well as insight into which countries may offer the most competitive manufacturing environments and the most attractive business opportunities for manufacturers, Wince-Smith said.