We use cookies to provide you with a better experience. By continuing to browse the site you are agreeing to our use of cookies in accordance with our Cookie Policy.
Home » Industrial recession? Yes and no.
Forward Thinking

Industrial recession? Yes and no.

The recent weakness in U.S. industrial production has grabbed headlines and raised concerns about another recession. Indeed, with industrial production falling 0.5 percent in February—the fifth decline in the last six months—and with activity down 1.6 percent from last year, the latest industrial-sector data weren't encouraging. With that, capacity utilization has fallen to 75.3 percent, about 4.7 percentage points below its long-term average.

Where is this weakness coming from? There are essentially two sources. The first is energy; the second is "global headwinds."

With regard to energy, the sharp plunge in oil prices has been the main catalyst. As oil prices fell from US$100 per barrel in mid-2014 to around US$30 per barrel in early 2016, investment in the oil and gas sector contracted severely. The sector, which represented about 1 percent of the U.S. economy at the end of 2014, now represents just under 0.5 percent of gross domestic product (GDP). On its own, the drag from reduced oil and gas investment imposed a 0.4 percentage point drag on real GDP last year. Likewise, the drop in industrial production over the past 12 to 18 months has largely been due to reduced energy output (energy products, drilling, converted fuel, and primary metals). The subsector saw its output fall 10 percent from an early-2015 peak, bringing its share of total industrial production back to the 2009 level—prior to the boom in "unconventional energy," such as oil obtained through hydraulic fracturing.

The other key factor weighing on industrial production is often described as "global headwinds" in the form of a strong U.S. dollar and sluggish global demand. Indeed, the near 20 percent appreciation of the U.S. dollar has rendered U.S. exports more expensive, thereby weighing on final external demand. Simultaneously, the sluggish global growth environment, with emerging markets facing a gloomy outlook, has also weighed on U.S. export prospects.

Are we in an industrial recession?

A question on many minds right now is whether the United States has entered an industrial recession. The short answer is both yes and no. Based on the sometimes-abused definition of a recession being two consecutive quarters of contraction, we can say that industrial production indeed entered a recession at the start of 2015. While output rebounded in Q3 2015, it has since fallen back into contraction with a 3.25 percent decline (annualized) in Q4 2015 and another decline expected in Q1 2016. 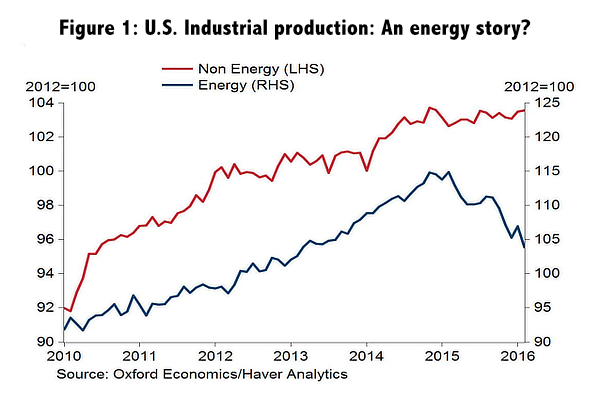 Is this sufficient to conclude that the entire industrial production complex is in a recession? Not really. As described above, while nonenergy output has flattened, it is not declining. (Figure 1 shows a comparison of energy versus nonenergy-based production.) In fact, despite a number of weak months, manufacturing output has increased in seven of the last eight quarters, and the latest data show manufacturing production trending at a 1.1 percent year-over-year pace in February. More specifically, we find that the weighted sum of manufacturing subsectors contracting in February 2016 was "only" 32 percent—near cyclical lows—and well below the 50-percent threshold generally associated with economywide recessions. (See Figure 2.) 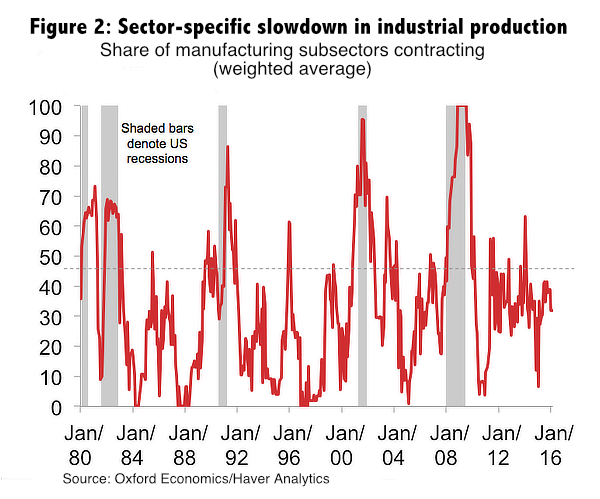 In other words, while some manufacturing sectors are struggling, others are not. With so much of the industrial weakness focused on the energy sector, it is not surprising that machinery is one of those hardest hit. The oilfield equipment collapse has only a limited direct impact since it comprises only about 6 percent of total machinery, but the indirect supply chain impact across other subsegments, such as pumps, motors, and material handling equipment, is more significant. Additionally, because of its high trade intensity (40 percent of output is exported), machinery suffers disproportionately from global headwinds—not only because of the strong dollar but also because equipment demand remains weak in the key European and Chinese markets.

Consumer-oriented sectors, meanwhile, have been more resilient. In the case of food and beverages, there has been a marked acceleration in activity—a direct result of low trade intensity and robust household consumption. Healthy consumer demand is also supporting U.S. automotive production, which, despite a small pullback in Q4, reached a 14-year high last year.

Outlook: Cloudy but not super-stormy

Outside of what appears to be sector-specific weakness in the industrial arena, the rest of the economy continues to display solid fundamentals. We continue to see strong employment growth, solid income growth, and resilient private sector confidence supporting private sector spending. Perhaps the most descriptive illustration of this resilience comes from the Institute for Supply Management's nonmanufacturing index, which appears firmly fixed around the 55 threshold for solid expansion. (See Figure 3.) Since the nonmanufacturing sector represents close to 90 percent of the U.S. economy, this is a good indication that overall the U.S. economy remains on solid footing. 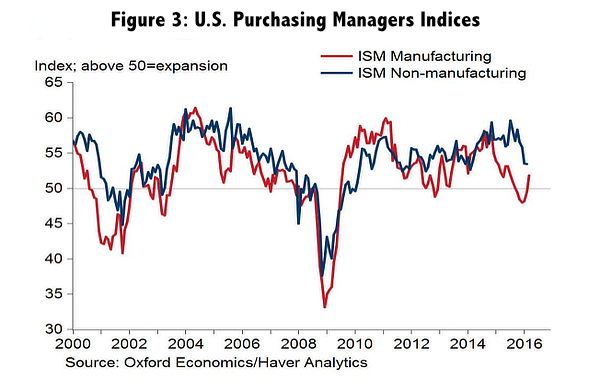 After growing an average 2.9 percent in 2014, industrial production slowed sharply, growing only 0.3 percent in 2015, weighed down by weakness in the energy segment and global headwinds. However, while we expect output will contract in Q1 2016, we foresee subdued positive momentum through the rest of the year. In particular, we expect the drag from energy to become less severe and that an ongoing need or desire to replace the aging stock of industrial equipment will provide some cushion. Additionally, low oil and natural gas prices should support chemical production, which has started to see important investment in new facilities in the United States.

From supply chain to "supply web"