We use cookies to provide you with a better experience. By continuing to browse the site you are agreeing to our use of cookies in accordance with our Cookie Policy.
Home » Who can create the best supply chain of all?
CSCMP Notebook

Who can create the best supply chain of all? 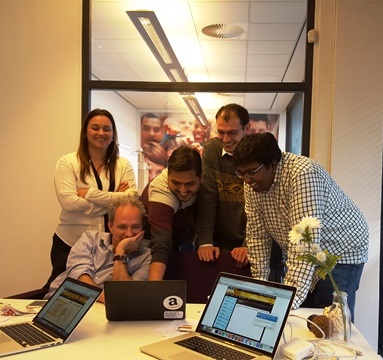 The Benelux region's team gathers to assess what its virtual company's next move should be in CSCMP's Roundtable Global Challenge.

After two rounds of play, the field was narrowed down to three teams: one from the Colombia Roundtable, one from the Benelux Roundtable (see photo), and one from the Arizona Roundtable. At press time, those teams were set to compete in a final, winner-takes-all competition at the 2016 Roundtable Leadership Forum in Southern California, June 17-18, 2016. The winning team earns bragging rights and an all-expenses-paid trip to CSCMP's Annual Conference in Orlando, Florida, September 25-28, 2016. Members of the winning team will be recognized onstage at the conference for their achievements.

The first phase of the competition consisted of teams competing at the local CSCMP roundtable level. Contests took place at six roundtables in the United States and an additional six international roundtables. The teams consisted of individuals from such organizations as Ikea, Puig, Morton Salt, Expeditors, University of South Florida, Georgia Tech Panama, Manhattan Associates, Lam Research, and others. The winning team for each of those roundtables then competed in a global challenge, which produced the three finalists.

Pam Scheibenreif, director of member services and roundtables, believes that the challenge has achieved its dual goal of providing both education and connections. The winning Colombian team, to name just one example, consists of a mix of students, professors, and practitioners.

Sergio RamÃ­rez, a professor of supply chain management at Universidad EAFIT in MedellÃ­n, Colombia, is participating on that team and says the game has provided valuable feedback to his institution. "As a university, we like to challenge our knowledge in supply chain and logistics," he said. "Plus, we have an undergraduate degree and a postgraduate degree, [and] we wanted to validate that we are on the correct academic path."

Nonacademic participants also spoke highly of the game's educational value. "[We learned that] if you alter too much at once in your supply chain strategy, you lose control," said Bert Boer, vice president of global logistics for VMI Group, a production machinery manufacturer in the Netherlands. "Therefore, 'one step at a time' has proved to be more successful in comparison to rigorous changes."

Many roundtables have also used Fresh Connection as a way to increase networking opportunities, with the majority holding a social event after the actual competition. In addition, the game raised interest in CSCMP among nonmembers. For example, the Benelux Roundtable (Belgium, the Netherlands, and Luxembourg) saw its active membership increase by 10 percent during the local challenge. Additionally, its local event was hosted and sponsored by a prospective new member organization.