We use cookies to provide you with a better experience. By continuing to browse the site you are agreeing to our use of cookies in accordance with our Cookie Policy.
Home » Top-performing supply chains: Retail
Top-Performing Supply Chains

Traditionally, retail companies' supply chain performance and improvement has lagged that of their suppliers. They have been slower to adopt mature inventory and transportation systems. But this is changing. When we conducted our analysis for Supply Chain Insights' second annual Supply Chains to Admire listing, we were pleased to see retailers making sharp gains during the period of 2013-2015 to deliver on the promise of supply chain excellence.

No retailer made the cut for our 2014 Supply Chains to Admire list; but in 2015, five general merchandisers/retailers met the criteria: CVS, Wal-Mart, Dollar General, Dollar Tree, and Whole Foods.

When studying retail, it is important to note that not all retailers are the same. In fact, there are sharp contrasts between the different models of retail. The supply chains for grocery retail, for example, have few similarities with those for apparel. For our Supply Chains to Admire listing, we chose to break retail into three segments: apparel/specialty retail, mass merchant retail, and grocery retail.

In Figure 1, we analyze companies in the mass merchant retail segment for the period 2006-2014, while in Figure 2, we share insights on grocery retailers for the period of 2006-2014. 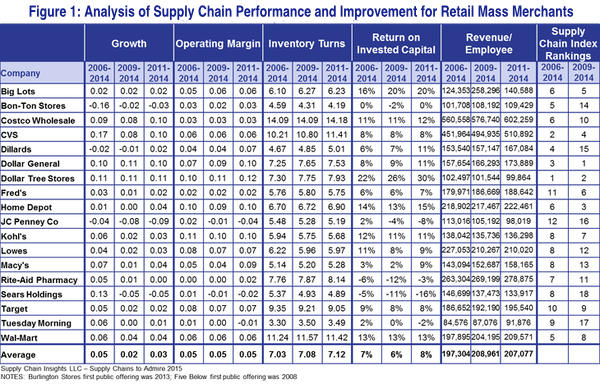 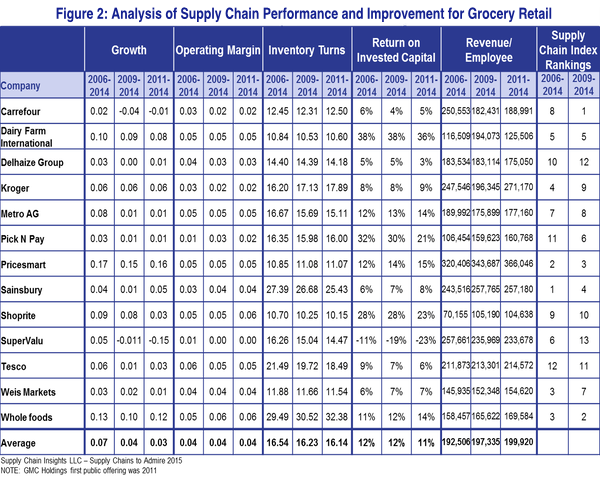 What drove the higher level of performance? A common characteristic of the top-performing retailers is that they redefined their supply chains to deliver to new business models, such as club stores, dollar stores, organic grocery stores, and new drug store formats that include "a store within a store" for well-patient check-ups. Other traits included data sharing with suppliers, perpetual inventory signals at the store and distribution center, and more advanced transportation management practices.

Who performed the best? While CVS, Whole Foods, and Dollar General were top performers, we believe that Wal-Mart is the supply chain leader. A supplier chain leader shows positive change on a portfolio of metrics while maintaining year-over-year momentum. The key is year-over-year momentum while maintaining resiliency. As shown in Figure 3, when Wal-Mart is compared to Target, Wal-Mart shows more momentum in inventory management and operating margin while Target lacks resiliency. (In the figure, the diamond indicates the average operating margin and inventory turn.)

Why is Wal-Mart a top performer? Wal-Mart sets the industry standard for data sharing with suppliers. Wal-Mart's data frequency and data granularity are the best in the industry, with the company sharing its daily data with suppliers ever day. In contrast, Target shares daily data on a weekly basis. Target's data, therefore, is not as clean, and the latency of the data is a barrier to the company's being able to provide customer service at the shelf level at the speed of the market. Wal-Mart is also the benchmark for tracking perpetual inventory changes at the store/distribution center, and good inventory management is critical for retail success.

In spite of its leadership position, Wal-Mart is currently under pressure to redefine itself. The dollar stores are attracting the cost-conscious consumer, and the drug stores are serving the inner-city shopper. With the maturation of the supply chains of the dollar stores and the drug channel, Wal-Mart's strong supply chain management skills are no longer as great of a competitive advantage as they were ten years ago. 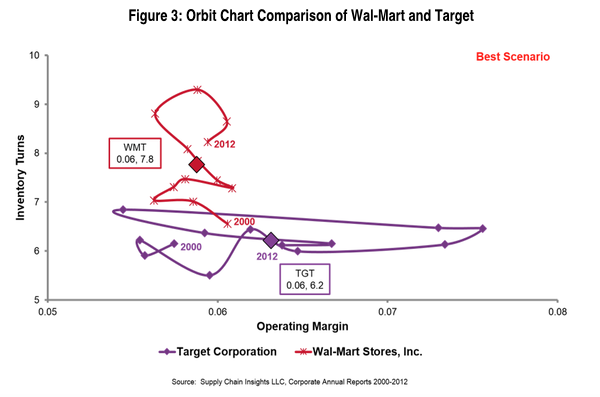 Supply chain excellence: It's tough to make it to the top—and stay there